The following is a personal tribute given by Dr. William Whitmore, a member of the Ponseti board of directors, in honor of Dr. Ponseti on June 3, 2014 in Barcelona during the International Clubfoot Symposium.

Fifty five years ago in 1959, I was 27 years old and had just been accepted for a residency at the University of Iowa in the Orthopaedic Surgery Department. Fernando and Nancy Aleu were friends in Iowa City and they invited my wife Kay and I for dinner at their home in Iowa City.   Another guest at the dinner party was Dr. Ponseti who was a relative of Fernando’s.  This was my first meeting with Dr. Ponseti.  I can tell you I was a little nervous, but Dr. Ponseti was very gracious, kind and was very entertaining.  I could tell from the conversation around that table, that he was a very passionate man especially about babies and children.  What a coincidence…fifty five years later Fernando and I are here talking about Dr. Ponseti in the town where he studied medicine, Barcelona.

I must tell you one personal story about Dr. Ponseti.  It was in my first or second year of residency and I was assisting Dr. Ponseti doing multiple tendon transplants, when he suddenly looked up at the clock and said, “Oh my god, I must leave right now or I will be late for my wedding.”  He did get to the wedding on time and married Helena Percas his soul mate. That marriage lasted for almost 50 years.

Dr. Ponseti began developing his method of clubfoot correction in 1948. By the time I was in training, the manipulation and serial casting technique that would become known as the Ponseti Method, was a routine part of our training.  My fellow residents and I did not realize that we were witnessing history in the making.  Usually, there are small steps involved with changes in the practice of medicine.  But occasionally there is what is sometimes called a paradigm shift.  That means a fundamental change in the treatment of a condition or disease.  Some examples might be Dr. Jonas Sauk with the polio vaccine or Dr. Alexander Fleming with the discovery of penicillin.   Dr. Ponseti made a paradigm shift in the treatment of clubfeet, as you all know.  The surgical treatment of clubfeet did not exist in Iowa after 1948.  I did not actually see this kind of surgery until 2008 on a trip to Africa.

My last year of residency was 1963 when Dr. Ponseti published his first paper on the non-operative treatment of clubfeet in the Journal of Bone and Joint Surgery.  I am sure he expected his paper to be accepted by the Orthopeadic community.  Unfortunately that was not the case.  It was not accepted and his method was criticized and often ridiculed by his colleagues.  He was told that his method of treatment only succeeded with babies born with clubfeet in Iowa.  He suffered the same fate as most innovators...rejection.

Dr. Ponseti retired in 1984 at the age of 70 and his Method continued to be used only by Orthopaedic surgeons who had trained in Iowa. In his retirement he enjoyed traveling, studying art, and hiking with Helena and his many friends around the world.  Some years went by and in the early 1990’s Dr. Ponseti returned to the Iowa Orthopaedic Department to pursue his love of treating clubfeet.  I believe he had an empty space in his heart and wanted to try to fill that emptiness by trying, again, to bring his treatment method to the broad Orthopaedic community. He went back to the clinic and the treatment of his babies.  He did long term follow-up studies and in the mid-nineties he published his book,  “Congenital Clubfoot – Fundamentals of Treatment”.  He did something else that was extremely important.  He described his method on the Internet and the revolution against surgical treatment of clubfoot began.

Martin and Alison Egbert live in Las Vegas, Nevada. In 1999 they had a son, Josh, who was born with clubfeet.  After much research and travel, Martin and Alison brought their son to Iowa City to be treated by Dr. Ponseti.  But Martin and Alison didn’t stop with just the treatment of their son.  They, along with other parents, started websites to proclaim this revolutionary non-surgical Ponseti Method of treatment.  It is very interesting that lay-parents like Martin and Alison recognized the value of the Ponseti Method before it was accepted by most professional physicians.

Very soon, Dr. Ponseti was seeing patients from every state in the country and also many foreign countries.  Parents around the world began to fight for acceptance of the Ponseti Method of treatment in their local communities.

During the early years of this century, the momentum for the acceptance of the Ponseti Method was growing and many physicians around the world contributed to this effort.

On Sept 27, 2006, the Iowa State Board of Regents, who is the governing body of the University of Iowa, approved the formation of the Ponseti International Association.

In 2007, the first International Clubfoot Symposium was held in Iowa City.  I was retired and for no particular reason other than to see my old Professor, I registered for Symposium.  It was then that I was infected with a highly virulent virus. I think many of you have been infected with the same virus……I call it THE PONSETI CLUBFOOT VIRUS.  As you know, the disease is incurable and you must learn to live with it.

After the symposium, I became very involved with PIA.  The years just after the formation of PIA were devoted to working with CBM in 10 countries to spread the Ponseti Method.  Money was very scarce and progress was slow.  My son, Bob Whitmore, and his wife Molly, contributed funding that allowed PIA to establish an office and a staff.

Dr. Ponseti continued to follow his passion of treating babies with clubfeet until his death in October of 2009.

He would have been proud of the Second International Symposium held in 2012.  It was a great success with 45 countries represented and 60+ papers delivered. At that meeting a declaration and a promise was made to continue spreading the Ponseti Method.   I know it would make Dr. Ponseti very proud of the progress that has been made by PIA, and the many skilled clubfoot providers and advocates, as a group of dedicated people in many different capacities. 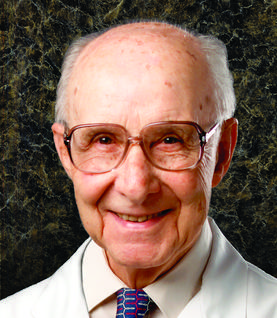 In 1941, Dr. Ponseti came to the University of Iowa to finish his residency and went on to join the faculty of orthopaedic medicine in 1944.  Dr. Arthur Steindler, the head of the department at the time, asked Ponseti to review the results of clubfoot surgeries being performed at the University of Iowa, and what he learned was not encouraging. He found that, in adulthood, former surgical patients often experienced foot stiffness, pain, arthritis, and limited mobility, and in many cases required additional surgery.

By studying the anatomy and functions of a baby's foot, Dr. Ponseti developed a non-surgical method to correct clubfoot in infants through gentle manipulation of the feet followed by the application of plaster casts.  The success of the Ponseti Method has been well documented through patient studies and research articles.